Since you apparently can’t have a Sam Raimi Spider-Man film without Bruce Campbell (and what self-respecting geek would want one?), the cult icon and star of Raimi’s Evil Dead trilogy revealed to Access Hollywood that not only will he appear in the next entry in the blockbuster superhero series—which begins shooting in January—but his role will be much larger than his brief cameo appearances in the previous three films. 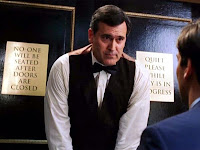 Access Hollywood speculates that Campbell may be playing Spidey villain (and master of illusion) Mysterio, but I’m actually hoping Raimi takes a stab at Kraven the Hunter as the baddie in the next movie. But then again, as /Film notes, Campbell having a “major” part does not in any way mean that he’ll be the villain. And Campbell himself admitted that he doesn’t even know what character he could be playing. Regardless, news that we’re getting more Bruce is pretty groovy (ha!) for those of us paying attention.

Spider-Man 4 is due to hit theaters May 2011.
Posted at 9:14 PM
Email ThisBlogThis!Share to TwitterShare to FacebookShare to Pinterest
Labels: Bruce Campbell, Sam Raimi, Spider-Man