Last night at the MTV Video Music Awards, Kanye West pretty much brought to the surface everything that’s wrong with popular music—and pop culture, some would argue—by exhibiting a complete and total disregard for class and common decency in front of the entire world. In case you’ve spent your Monday under a rock (or without an Internet connection), West rushed the stage during Taylor Swift’s acceptance speech for Best Female Video to proclaim that Beyoncé Knowles should have won instead.

“Yo Taylor, I'm really happy for you, I'ma let you finish, but Beyoncé has one of the best videos of all time," West said, referring to the sexy video for “Single Ladies (Put a Ring on It).” Swift was noticeably crushed when West snatched the mic from her. Everyone else just got douche chills.

MTV Shows
Of course, Knowles proved later on that not only is she one of the hottest performers on the planet, but she is also among the most gracious. While accepting her award for Video of the Year, she invited Swift onstage for a second shot at her speech. So bravo to her.

Since we’re on the subject of MTV (great segue, right?), I picked up MTV Games’ The Beatles: Rock Band for Xbox 360 this weekend and, as a self-proclaimed Beatlemaniac, it’s amazing. While I thought I’d grown bored with rhythm games and their needlessly overpriced plastic peripherals, developer Harmonix has truly delivered a love letter to Beatles fans. And, as the song goes, “Love is all you need.” 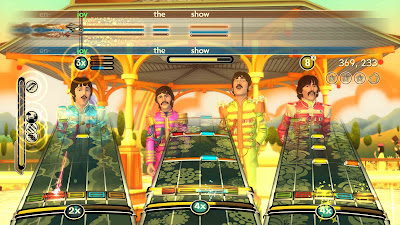 I should mention that I am a terrible faux drummer. If the game’s higher difficulty levels are any indication, Ringo Starr is a better musician than we’ve been giving him credit for.
Posted at 6:09 PM
Email ThisBlogThis!Share to TwitterShare to FacebookShare to Pinterest
Labels: Beatles, Kanye West, MTV, Random Bloggery