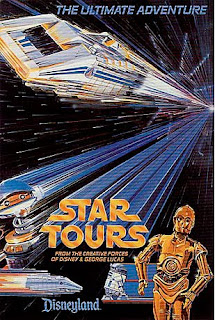 If you’re any kind of Star Wars fan, no trip to Disneyland or Walt Disney World is complete without at least one visit to Star Tours, a flight simulator that takes parkgoers to that galaxy far, far away.

Well, I’ve got some bad news. The Los Angeles Times’ Hero Complex blog reports that at Disney’s D23 expo, Disney Parks and Resorts Chairman Jay Rasulo announced that the ride is closing in October 2010. However, it’s getting a 3D update in 2011, complete with new sequences from the prequel films. In addition, while Yoda was not a part of the original Star Tours ride—which opened in 1987—voice actor Frank Oz told Hero Complex previously that he’s recorded new dialogue for the updated version.

According to Rasulo, Star Wars creator George Lucas has been heavily involved in the ride update. Although, to anyone that’s purchased numerous versions of the Star Wars trilogy over the years, Lucas’ affinity for tinkering is no secret.

“Ever since we did our original Star Tours attraction with George, the relationship with Imagineering has been very, very close,” Rasulo told D23 attendees on September 12. “We strive for authenticity in everything we do. This is a Lucas idea, this is Lucas storytelling, interpreted by Imagineering.”

I got a chance to experience Star Tours at Disney World in the spring of 1999, and I’m honestly surprised that it’s taken Disney this long to revamp the aging attraction. My one request? That they keep Paul Reubens as the voice of the ride’s droid pilot, RX-24. Knowing there are robots that talk like Pee-wee Herman somewhere in the world helps me sleep sounder at night.

So, let me get this straight. Disney is upgrading Star Tours, owns Marvel, and is apparently remaking the Beatles’ Yellow Submarine movie using motion-capture animation.

Did Disney get kinda awesome in the past month?
Posted at 9:07 PM
Email ThisBlogThis!Share to TwitterShare to FacebookShare to Pinterest
Labels: George Lucas, Marvel Comics, Star Tours, Star Wars, The Beatles