Call of Duty: Modern Warfare 2 to Feature Acts of Terrorism

The Call of Duty series rarely pulls punches when it comes to realistic depictions of the horrors of war, but the latest installment, Modern Warfare 2, may spark some controversy by including scenes of terrorism. 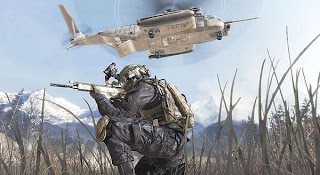 An Activision representative told gaming blog Kotaku that, early on in the campaign, players reach a mandatory checkpoint “in which they are warned that an upcoming segment may contain disturbing elements and they can choose not to engage in the gameplay that involves this scene.” The segment is part of the game’s infiltration-focused storyline, which requires players to earn the trust of a Russian terrorist bent on bringing the world to its knees.

According to The Associated Press and other media outlets, illegally leaked footage from the game reveals that the sequence in question allows players to shoot innocent civilians in an airport during a terrorist attack.

I think it’s smart that Activision and developer Infinity Ward are making player participation in this segment entirely optional. While actively trying not to offend sensitive players, they aren’t compromising content. This title is rated M for Mature—any halfway intelligent adult gamer should be prepared for whatever this game dishes out. That said, we should all prepare ourselves for a firestorm of negative publicity.

Modern Warfare 2 hits stores November 10, but look for the inevitable Fox News stories about a “terrorism simulator” poisoning our nation’s youth to follow shortly after.
Posted at 11:51 AM
Email ThisBlogThis!Share to TwitterShare to FacebookShare to Pinterest
Labels: Activision, Call of Duty

My name is Josephine Craig I was browsing internet and found your blog. The author did a great job. I will subscribe to your RSS feeds. Thank you for your contribution. I am a web designer myself. And here some examples of the websites that I designed for cash advance payday loans company.