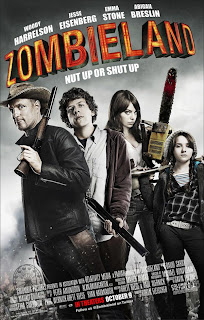 In spite of pop culture’s ongoing obsession with vampires, spurred by Stephenie Meyer’s Twilight books and accompanying feature films, zombies (the other undead) haven’t lurched out of the limelight just yet. While not the first zombie comedy—the 1980s Return of the Living Dead films and Shaun of the Dead immediately spring to mind—Zombieland is an uproariously funny and relentlessly gory trek through post-apocalyptic, zombie-ridden America.

The main character is Columbus, played by Jesse Eisenberg doing his best Michael Cera impression (these two are going to be fighting over the same roles for years). Serving as the narrator, Columbus explains that his neurotic tendencies have been key to his survival, inspiring him to come up with a list of rules to avoid falling victim to the undead. His rules include traveling light, “double tapping” seemingly incapacitating zombies (always shoot them twice) and to beware of public bathrooms. Anyone who’s read Max Brooks’ The Zombie Survival Guide is sure to get a kick out of these zombie survival rules, which crop up humorously throughout the film.

Columbus (everyone is nicknamed after their hometown) crosses paths with Tallahassee, a Twinkie-loving badass zombie killer played by Woody Harrelson. Harrelson seems to be enjoying himself whenever he’s onscreen, and his chemistry with Eisenberg provides much of the film’s comedy that isn’t derived from creatively massacring—or running from—the living dead. The pair soon stumbles upon con-artist sisters Wichita (Emma Stone) and Little Rock (Abigail Breslin), who round out this film’s makeshift and eventually somewhat functional family unit. Once they all learn to get along, the group heads west to Pacific Playland, an amusement park that’s rumored to be zombie-free. If you’ve ever seen a zombie movie before, you already know those rumors are complete bull.

As if director Ruben Fleischer’s genre mash-up wasn’t awesome enough—finding a tremendous balance between horror and comedy—a brilliant cameo toward the end of the film sends Zombieland right over the edge. I won’t spoil the surprise here, but it’s one of the funniest things I’ve seen in a movie in recent years.

With franchise written all over it (likely smeared in blood), Zombieland is an instant comedy classic.
Posted at 3:50 PM
Email ThisBlogThis!Share to TwitterShare to FacebookShare to Pinterest
Labels: Wort Report Review, Zombieland