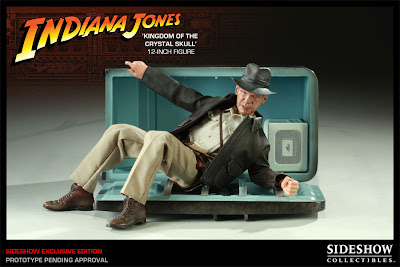 When I heard that Sideshow Collectibles was releasing an Indiana Jones and the Kingdom of the Crystal Skull action figure set based on the aged archaeologist’s escape from a nuclear explosion in a refrigerator, I assumed it was some kind of elaborate joke. After all, who would want to pay $174.99 to own and display a constant reminder of one of the most ludicrous and unintentionally hilarious moments in modern cinema?

The answer? At least 600 people. According to Sideshow’s website, this limited-edition 12-inch figure is already sold out, and it doesn’t even ship until early 2010.

I would buy that if I had the money to spend on stupid meaningless stuff...something to aspire..