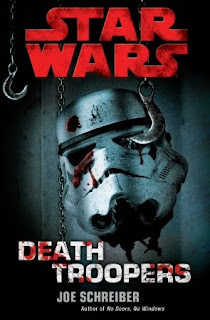 Today, October 13, horror-themed Star Wars novel Death Troopers hits store shelves. Penned by Joe Schreiber, the book revolves around a contagion that kills quickly and revives its victims. Those victims then feast on the flesh of the living.

Folks, Star Wars and zombies are together at last.

I don’t care much for these Expanded Universe novels, mainly because too many of them read more like generic sci-fi than genuine continuations of the Star Wars films. That said, I love the idea of a zombie story set in that galaxy far, far away. I’m in.

Death Troopers retails for $24.00.
Posted at 9:00 AM
Email ThisBlogThis!Share to TwitterShare to FacebookShare to Pinterest
Labels: Death Troopers, Star Wars