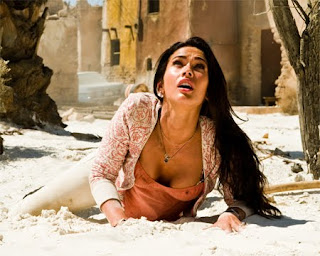 While the tension between Megan Fox and her Transformers director Michael Bay is the stuff of legend at this point (she has reportedly compared him to Hitler), the explosion enthusiast rushed to his leading lady’s defense at a recent Victoria’s Secret fashion show.

“She called me [after the Hitler comment] and goes, ‘It’s all bullsh—t, Mike,’” Bay told USA Today’s Andrea Mandell. “The press, they just like to prey, and stalk, and pounce and find a good little juicy thing. But she’s always wanted to do these crazy comments. That’s just her. She’s great.”

As for those rumors that Bay’s going to kill off her character, Mikaela Banes, in the next Transformers sequel? “No, no, no,” he said. “She gets enough of that already.”

The USA Today piece points out that Bay directs commercials for Victoria’s Secret, which is a bit of a shock. That being the case, I’m surprised we haven’t seen more pyrotechnics and giant robot genitals in our lingerie ads.
Posted at 4:16 PM
Email ThisBlogThis!Share to TwitterShare to FacebookShare to Pinterest
Labels: Megan Fox, Michael Bay, Transformers