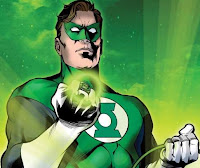 Green Lantern star Ryan Reynolds told MTV’s Splash Page recently that while the upcoming film intends to introduce mainstream audiences to Hal Jordan, the titular DC Comics character, it won’t be like most drawn-out superhero movie origin stories. Rather, it will cut to the chase pretty quickly.

“It is [an origin story] to a certain degree, but it’s not a labored origin story, where the movie [truly] begins in the third act,” he said. “The movie starts when it starts. We find out Hal is the guy fairly early on, and the adventure begins.”

Reynolds also drew comparisons between this film, directed by Martin Campbell (Casino Royale), and Jon Favreau’s Iron Man, saying that some of the best parts of the film don’t necessarily involve the Green Lantern saving the universe with his super-powered ring.

I was never the biggest Green Lantern fan growing up, but I’ve been thoroughly enjoying what Geoff Johns has been doing with the character over the past few years—especially Green Lantern: Rebirth and the phenomenal Blackest Night. This could be a major ongoing franchise for Warner Bros. if they play their cards right. Casting Reynolds was an excellent start.