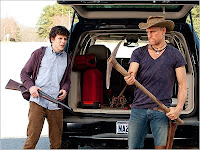 Recently, Zombieland director Ruben Fleischer told Moviehole that the sequel to the zombie survival comedy will likely be in 3D. Yep, that means blood and guts, right in your face. Sounds fun, right?

“The genre really lends itself to 3D,” said Fleischer, who confirmed that not only is Sony Pictures gearing up for a follow-up, but the original cast—Woody Harrelson, Jesse Eisenberg, Emma Stone and Abigail Breslin—is also eager to return.

Emerging as a surprise hit earlier this year, Zombieland arrived at a time when I was getting pretty tired of zombie movies, and the film was so freshly entertaining that it completely reignited my interest in the sub-genre. While Fleischer told Moviehole that the film is a few years away, I’m assuming that this and other 3D film projects will be fast-tracked if James Cameron’s Avatar is a success. But with one anonymous early reviewer calling the anticipated 3D sci-fi epic “alienating,” “weird” and “literally vomit inducing,” 3D technology could be a hard sell in the years to come.
Posted at 3:04 PM
Email ThisBlogThis!Share to TwitterShare to FacebookShare to Pinterest
Labels: 3D, Avatar, Zombieland