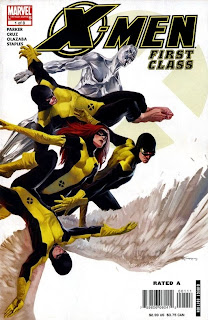 Last week, Bryan Singer announced he would be returning to the X-Men franchise with X-Men: First Class, a move met with nods of approval from the geek community. While not without its flaws, Singer’s original X-Men helped to once again legitimize comic-to-film adaptations when it hit theaters in 2000, after Joel Schumacher’s Batman & Robin utterly destroyed the genre three years earlier. Singer’s X2: X-Men United, released in 2003, remains one of the best superhero films ever released. Unfortunately, Singer later abandoned the franchise to lesser directors, leaving us with the lackluster X-Men: The Last Stand and the downright sloppy X-Men Origins: Wolverine.

In an interview with The Hollywood Reporter, Singer said that his return to the franchise came about during a recent conversation with Fox co-chairman Tom Rothman. “We not only concluded a deal, but I’ve got a pretty concise treatment,” Singer said. “There’s a story that I really want to tell.”

While he would not reveal the specifics of that story, he said “it’s basically about the formation of the X-Men. How they began and the relationship between a young Xavier and a young Magneto.”

As fans probably know, a Magneto prequel was thought to be in the planning stages alongside another Wolverine film and a Deadpool spinoff. However, it seems like First Class will incorporate elements that would have appeared in the Magneto film.

“This story would probably utilize some of the Magneto story because it deals with a young Magneto, so it might supersede that because this would explore that relationship between a young energetic professor and a disenfranchised victim of the Holocaust,” explained Singer.

But with all of these prequels and spinoffs, is the X-Men franchise spreading itself a bit thin? Singer doesn’t think so.

“The X-Men universe is boundless,” he said. “These are great characters. And as young characters, they are quite different than the characters we have seen in the contemporary movies.”
Posted at 9:17 PM
Email ThisBlogThis!Share to TwitterShare to FacebookShare to Pinterest
Labels: Bryan Singer, Magneto, Wolverine, X-Men