The Lord of the Rings Hits Blu-ray in April 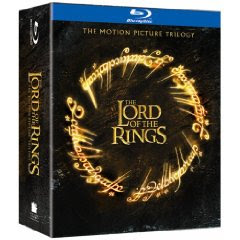 By Gandalf’s beard! Peter Jackson’s breathtaking Lord of the Rings trilogy is finally making its way to Blu-ray on April 6. But, Den of Geek reports, the six-disc set will only include the theatrical cuts of the films. If you want high-definition versions of the Extended Editions—the only way to watch these films, in my opinion—then you might need to wait until the first installment of The Hobbit hits theaters in 2011. A smart move by Warner Bros., but a cash grab nonetheless.

Since I’ll likely have a Blu-ray player of some sort by April, I’m tempted. However, I already own both versions of these movies on DVD, and I’m not about to make the same mistake on a new format. I’ll pass for now.
Posted at 5:00 PM
Email ThisBlogThis!Share to TwitterShare to FacebookShare to Pinterest
Labels: Blu-ray, Lord of the Rings, Peter Jackson

This will, most undoubtibly, be the only blue ray movie I buy. It will so be worth it!!!