And the Iron Man 2 images keep coming! Apple has debuted a pretty awesome poster featuring Mickey Rourke as Whiplash, complete with badass energy whips and, judging by the newspaper clips in the background, an unhealthy obsession with Tony Stark. I was worried about how this character would work onscreen, but it seems as though director Jon Favreau and his crew have the right idea. Rourke is going to own this role. 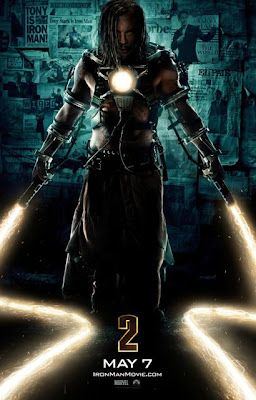 Iron Man 2 hits theaters May 7, but, according to Film School Rejects, a trailer for the anticipated will be attached to Sherlock Holmes, which also stars Robert Downey Jr. That film opens Christmas Day.
Posted at 9:00 AM
Email ThisBlogThis!Share to TwitterShare to FacebookShare to Pinterest
Labels: Iron Man 2, Marvel Comics, Mickey Rourke, Robert Downey Jr.