Production Delayed on The Hobbit 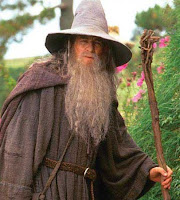 Peter Jackson has announced that production on the two-part film adaptation of J.R.R. Tolkien’s The Hobbit will start in the summer of 2010—a few months later than expected, Variety reports. The Lord of the Rings prequels, helmed by Hellboy director Guillermo del Toro, are slated for release in December 2011 and December 2012.

But what on Middle-earth is the hold up? Jackson, an executive producer on the film, said that he, Fran Walsh, Philippa Boyens and del Toro are still working on the second Hobbit script, and aim to have it finished early next year. After the script is completed, the film will be budgeted and shooting can begin in New Zealand.

I have faith in Jackson, and I doubt we’ll be seeing the first installment of The Hobbit any later than 2011. But whenever it does hit theaters, rest assured: geeks will be there…and back again.
Posted at 12:24 AM
Email ThisBlogThis!Share to TwitterShare to FacebookShare to Pinterest
Labels: Lord of the Rings, Peter Jackson, The Hobbit