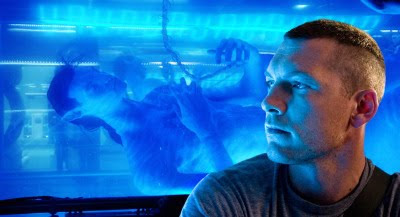 Let me get my hyperbolic fanboy raving out of the way: Avatar is a groundbreaking technological achievement. Heralded as a cinematic game-changer that would forever transform the way we look at movies, James Cameron’s highly anticipated 3D sci-fi epic had a lot to live up to. Predictable storyline aside—if you’ve seen the trailer, you know exactly what happens—Avatar is satisfying in ways most big-budget blockbusters simply aren’t. Yes, Cameron places a heavy emphasis on visual effects wizardry. But those visual effects tell the story; they don’t replace it.

While I’d hoped to see Avatar on its release weekend, weather and holiday-related scheduling conflicts prevented me and my friends from getting to the theater until Sunday, December 27. The place? City Center 15: Cinema De Lux in White Plains, New York. The time? 8:15 P.M. Beverage of choice? Diet Coke. It was on. Or was it?

Even though the movie had been out for more than a week, this screening was sold out, and my friends and I had to sit fairly close to the front of the theater when we got to our seats a few minutes before show time. We sat through the trailers as the remaining seats were claimed by grateful latecomers. But something didn’t seem right. The family-friendly coming attractions didn’t seem at all tailored to the type of audience Avatar would attract. We sat through an advert for a terrible babysitting comedy starring Jackie Chan. Another for a movie in which Dwayne “The Rock” Johnson becomes the Tooth Fairy called, you guessed it, Tooth Fairy. Then came the Twentieth Century Fox logo, while three prepubescent rodents started singing “You Really Got Me.”

We were watching Alvin and the Chipmunks: The Squeakquel. We were in the right theater, but whoever was running the projector screwed up big time. An angry mob of movie nerds wearing oversized 3D glasses leapt from their seats demanding blood, or, at the very least, that someone fix the problem. We didn’t pay $15 to get jerked around while anthropomorphic chipmunk shenanigans played out on screen. Fortunately, the problem was fixed in a timely manner. We all put on our 3D glasses and began our journey to Pandora.

And what a journey it was.

Avatar takes place in the year 2154, when a corporation called RDA has set up camp on Pandora, a moon of a planet called Polyphemus. On Pandora is a mineral called unobtainium, which is highly sought after by the corporation and its slimy administrator, Parker Selfridge (Giovanni Ribisi). Standing in the way of RDA’s ravishing of Pandora’s landscape are the Na’vi, the moon’s nine-foot-tall, blue-skinned inhabitants.

To interact with the natives in the hope of learning from them and ultimately earning their trust, the corporation has created human-Na’vi hybrids called avatars, which are remotely operated from a laboratory. Each of the avatars is genetically matched to a human driver, but when one of the drivers is killed, his twin brother Jake Sully (Sam Worthington) is called in to take his place. Jake, a former marine, is wheelchair-bound, lacking his brother’s PhD and formal training. Dr. Grace Augustine (Sigourney Weaver), head of RDA’s avatar program, has her doubts about this newly enlisted jarhead. But because avatars require a genetic match, she has little choice but to accept Jake into the program to serve as a bodyguard on an exploratory mission into the lush jungles of Pandora.

Linked up to his nine-foot-tall blue body, Jake relishes the ability to once again use his legs while exploring Pandora, but he soon runs afoul of some of the native wildlife and is separated from his group. He is rescued by a female Na’vi named Neytiri (Zoë Saldaña) who, after initial trepidation, brings Jake back to her tribe, where she is instructed to teach him the ways of their people.

Grace views Jake’s acceptance into Neytiri’s tribe, the Omaticaya, as a fantastic learning opportunity. However, Colonel Miles Quaritch (Stephen Lang), head of RDA’s mercenary security force, sees things differently. If Jake can use his newfound influence to feed him military intelligence on the Na’vi and convince them to leave their so-called Hometree—which sits atop a massive deposit of unobtainium—then he’ll make sure to pull the strings necessary to get him his legs back. If the Na’vi can’t be convinced to move, the site will be bulldozed regardless.

So, with Neytiri’s help, Jake begins immersing himself in Na’vi culture, keeping in mind the infiltrative goal of his mission. But as he ascends the social ladder of the Omaticaya—and begins falling for Neytiri—life with the Na’vi becomes far more attractive than his relatively constrictive life as a human. When the corporation grows impatient and begins its assault on Hometree, Jake must make a choice: is he human or Na’vi? You already know the answer.

I should say at this point that Avatar might be seen as a bit heavy handed in its left-leaning political commentary and military demonization, but those same criticisms could be leveled at the original Star Wars. In fact, the similarities between George Lucas’ space opera and Cameron’s burgeoning sci-fi franchise (you know there will be sequels) are numerous: both are simplistic modern myths showcasing revolutionary visual effects for their respective time periods, and both have been criticized for being shallow by those who’ve missed the point entirely.

Yes, from a story perspective, Avatar is nothing new, but the familiar narrative hardly detracts from the overall experience. This film is all about falling in love with Pandora: its strange creatures, its exotic bio-luminescent plant life and its dreamlike, otherworldly beauty. The 3D technology—because that is the only way to see this movie—makes Pandora tangible, and the stunning motion-capture effects courtesy of Weta Digital make the Na’vi just as compelling as any flesh-and-blood actor. You never feel like you’re watching special effects, even though you’re immersed in them for the majority of this film’s 162-minute running time. The best visual effects are the ones that draw attention to what they bring to life: not how expensive they look.

As far as performances go, I must say I was pleasantly surprised by Worthington. He didn’t exactly blow my mind in Terminator Salvation earlier this year, and I can’t say I necessarily looked forward to him carrying yet another multi-million dollar blockbuster. But Worthington is quite good as Jake, both as a pained, paraplegic human and a cunning warrior in his avatar form. He has genuine chemistry with Saldaña, who remains absolutely stunning even underneath all of that digital makeup. Not that I have a thing for nine-foot-tall blue cat aliens or anything.

At this point, it’s unclear whether or not Avatar will go down as the movie milestone Cameron has purported it to be, but is it one of the best movies of 2009? Absolutely. This is escapist cinema at its finest.
Posted at 6:38 PM
Email ThisBlogThis!Share to TwitterShare to FacebookShare to Pinterest
Labels: Avatar, James Cameron, Wort Report Review

Sir, I applaud thee, for actually sitting through ANY of that movie about rats.

Now, on to the review! Very well written, conveyed my ideals of the movie perfectly. I am definitely going to be posting your review for my friends to read.

Bravo! A terrific review, enjoyed it very much.

Haha of course you compaired it to star wars! anything that is good must be put on trial next to star wars. That also shows how much you liked avatar, to have even placed them in the same catagory together.

I also appreciate how you included the pain we were put through in order to even get to watch the movie. It's as if 15 dollars wasn't enough. They needed more of a sacrifice, like our first born. Honestly, looking back at the mental anguish that caused, I would have rather been waterboarded.

At times it's wince-inducingly weak, and no amount of lush visuals can disguise that. Nor can they disguise how second-hand everything feels.