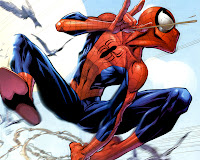 So, it looks like Marc Webb—who directed the indie romantic comedy (500) Days of Summer—is going to helm Sony Pictures’ Spider-Man reboot, which will hit theaters in 2012. Variety reports that Webb is only locked in for one movie at present, but since this next film will take Peter Parker back to high school, one would assume Sony has sequels in mind.

Yes, a guy named Webb is directing a Spider-Man movie. You can’t make this stuff up.

I loved (500) Days of Summer, and I’m at least confident that Webb knows how to deal with the romantic aspects of Peter Parker’s story. However, I’m not sure well he’ll handle the visual effects side of things. Spider-Man is an action-oriented character, after all. Then again, Jon Favreau was hardly an action director before Iron Man and that worked out pretty well.

Webb’s an offbeat choice, and this might turn out well. But it’s still a colossally bad idea to reboot such a popular franchise just 10 years after it started.
Posted at 5:49 PM
Email ThisBlogThis!Share to TwitterShare to FacebookShare to Pinterest
Labels: Marc Webb, Spider-Man