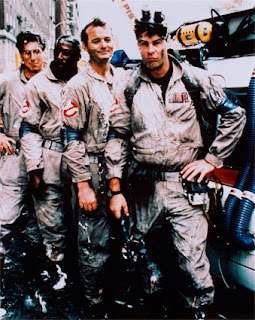 Surprised? You shouldn’t be. At the National Board of Review red carpet in New York City, Ivan Reitman—who directed the original Ghostbusters and its much-maligned sequel—told MTV News that he will be returning to the director’s chair for the third installment.

He also confirmed that the writing team of Lee Eisenberg and Gene Stupnitsky (The Office) has submitted the first draft of a script.

“They have delivered a draft,” Reitman told MTV’s Josh Horowitz. “We are working our way through another draft... good work is being done and all of us have our fingers crossed.”

And so do we. But keep those expectations tempered, people. Yes, Reitman is on board, and yes, the original cast is returning, but let’s not forget that Eisenberg and Stupnitsky also lent their pens to Year One, that now-forgotten and universally panned 2009 historical comedy co-written and directed by Dr. Egon Spengler himself, Harold Ramis. Uh oh.

Reitman hinted that Ghostbusters 3 might begin shooting this year.
Posted at 10:44 AM
Email ThisBlogThis!Share to TwitterShare to FacebookShare to Pinterest
Labels: Ghostbusters 3, Ivan Reitman

Do you remember the original proton pack toys that came out a very long time ago? If I could strap one on my back now, I would but I am too big. Thanks for the info, can't wait for it to come out!! ( and yes, I still have one)