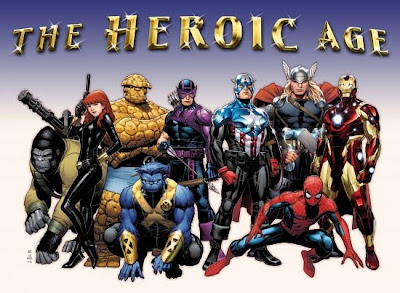 The Marvel Universe has been through a lot over the last few years. From civil wars to secret invasions to dark reigns, Spidey, Iron Man, Wolverine and the gang just can’t seem to catch a break. But Marvel promises that things are going to get a lot a cheerier for these characters later this year with the dawn of “The Heroic Age.”

“Our heroes have experienced some of their greatest trials and tribulations recently, but now there’s going to be a renewed hope among their ranks,” Marvel’s chief creative officer and editor-in-chief Joe Quesada said in a statement. “As our heroes emerge from the darkness, the Marvel Universe is going to be a more optimistic place than we’ve seen in quite awhile. But that doesn’t mean we’re making things easy for our characters!”

While some might speculate that this shift in tone has something to do with Disney’s recent $4 billion acquisition of the comic book publisher, Quesada told USA Today that this return to Marvel’s roots, “with more of a swashbuckling feel,” has been in the works for two years. Fans need not fear that their favorite titles are being watered down.

“There is no sanitizing of the Marvel books at all,” he said. “Our philosophy here is to just keep telling good stories.”

Personally, I think this is a great idea. I’ve always thought comics should be about escapism first and foremost, and the industry tendency to contemporize classic characters by making them “dark and gritty” doesn’t always sit well with me.

“The Heroic Age” kicks off in May with the release of Avengers #1, which will reunite Thor, Captain America and Iron Man on Marvel’s premier superhero team.
Posted at 9:21 PM
Email ThisBlogThis!Share to TwitterShare to FacebookShare to Pinterest
Labels: Marvel Comics

Its about Damn time! I have been in a state of dpression for the past three years!