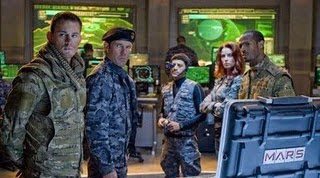 I might be in the minority on this, but I actually really liked Stephen Sommers’ G.I. Joe: The Rise of Cobra. It was dumb and ludicrously cheesy at times, but it was also far more enjoyable than Transformers: Revenge of the Fallen, last year’s other mindless, toy-based summer blockbuster.

Despite near-universal criticism, G.I. Joe was moderately successful, bringing in more than $300 million worldwide not counting revenue earned through home video sales and merchandising. As one might expect, Paramount Pictures is readying a sequel.

Do these names seem familiar? If you’ve been following movie news recently, you might have read that Reese and Wernick are also penning Deadpool, a film based on the popular Marvel Comics character.

Great writing was one of Zombieland’s many strengths, so this is promising news for fans who vehemently exclaimed “No, Joe!” when the first G.I. Joe movie hit theaters last August.
Posted at 5:56 PM
Email ThisBlogThis!Share to TwitterShare to FacebookShare to Pinterest
Labels: Deadpool, G.I. Joe, Marvel Comics, Transformers, Zombieland

NICE!! Aw man This Is Great News! I just hope they can make lightning strike again!