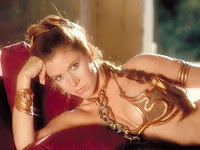 Carrie Fisher, Princess Leia herself, is feuding with the producer of her hit autobiographical Broadway show Wishful Drinking, saying that he owes her more than $60,000, the New York Post reports.

Fisher, who wrote and performed the one-woman show, claims that since her producer, Jonathan Reinis, did not fulfill certain contractual obligations during its run at New York’s infamous Studio 54, all of the rights to the show revert back to her.

“As you can imagine, Jonny seems to be a bit cranky, which I figure is why he still hasn’t paid me the remaining money he owes me,” she told the newspaper via e-mail.

Ronald Feiner, a lawyer representing Reinis, says Fisher’s claims are false. “It is our belief that she owes us a substantial amount in lost profits from what could be a lucrative tour,” he told the Post. “We have offers from Australia, Canada and theaters around the United States, but we are unable to close the deal because she will not perform the show.”

Fisher also says that Wishful Drinking was to be moved to a “first-class” Broadway house by December 31 of last year, which would mean a substantial salary increase. Reportedly, Fisher earned only $2,500 a week from the show at Studio 54.

“For whatever reason, [Reinis] was unable to get it done,” she said. “I don’t know why, since I was told there was plenty of theater availability. So, his rights reverted back to me under our contract.”

Unfortunately, I never got around to seeing Wishful Drinking, but I did read the book, which is loaded with behind-the-scenes Star Wars anecdotes. Apparently, according to George Lucas, Fisher could not wear a bra in A New Hope because there is no underwear in space. We later learned, thankfully, that gold bikinis are plentiful there.
Posted at 11:53 AM
Email ThisBlogThis!Share to TwitterShare to FacebookShare to Pinterest
Labels: Broadway, Carrie Fisher, Star Wars, Wishful Drinking