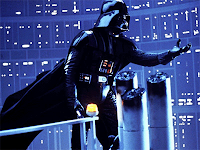 Former bodybuilder David Prowse, best known for playing Darth Vader in the original Star Wars trilogy, has made a full recovery after a yearlong struggle with prostate cancer, the U.K.’s Daily Mirror reports. Indeed, “The Force is strong with this one.”

The 74-year-old—whose brother has also beaten prostate cancer—was diagnosed after a worker from the Prostate Cancer Support Association suggested that he ask his primary care physician for a blood test.

“I’ve won the fight and I’m feeling better than ever,” Prowse told the Mirror. “Everyone was shocked by how well it all went.”

Prowse advises that all men over the age of 50 get tested for the disease.
Posted at 2:00 PM
Email ThisBlogThis!Share to TwitterShare to FacebookShare to Pinterest
Labels: Darth Vader, David Prowse, Star Wars