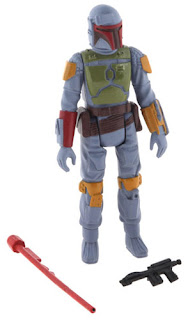 If you’re not a hardcore Star Wars geek or an avid action figure collector, news that Hasbro will be releasing a vintage-style rocket-firing Boba Fett toy this year probably isn’t all that exciting. But for the rest of us, the figure is a pretty cool bit of fan service. Well, it’s probably not “cool” in the conventional sense, but you know what I mean.

At Toy Fair 2010 in New York, Hasbro debuted the rocket-firing figure as part of its product lineup commemorating the 30th anniversary of The Empire Strikes Back. In 1979, Kenner (a company later acquired by Hasbro) advertised a rocket-firing Boba Fett as a mail-away offer, but the company eventually scrapped the spring-loaded missile feature citing safety concerns. Children of the 1970s never got their rocket-firing bounty hunter. Heartbreaking, I know.

More than three decades later, those kids—now grown-up fanboys and fangirls—can send away for a rocket-firing Fett (pictured) with the purchase of five specially-marked Star Wars action figures this fall. The toy is nearly identical to the 1979 version.

For more on Hasbro’s Fett-centric offerings—including a Boba Fett helmet you can wear—check out the Official Star Wars Blog.
Posted at 2:21 PM
Email ThisBlogThis!Share to TwitterShare to FacebookShare to Pinterest
Labels: Boba Fett, Hasbro, Star Wars