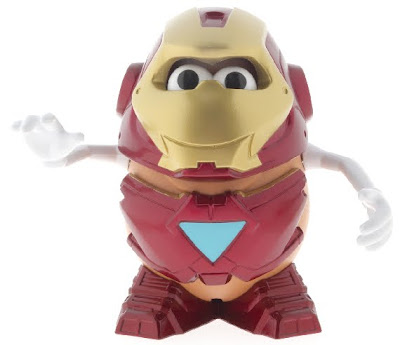 Iron Man 2 hits theaters on May 7 and, as one must surely expect at this point, it’s going to be accompanied by a veritable tidal wave of merchandise based on the film and comic books. At Toy Fair 2010 in New York, Hasbro debuted a wide variety of Iron Man 2 action figures, accessories, games and other playthings, but the most bafflingly incredible item in the lineup is surely Tony Starch, who is lovingly staring at you from the top of this post.

Yes, Hasbro is releasing an Iron Man Mr. Potato Head, who joins the ranks of Darth Tater, Optimash Prime, Spider Spud and other licensed side dishes-turned collectibles. Did I say collectibles? I meant toys. Yep. Toys are for kids, right? Why would I, a 26-year-old man, have any interest in buying an Iron Man-themed Mr. Potato Head? That’s just dumb…