James Cameron on Terminator Sequels: “The Soup’s Kind of Been Pissed In” 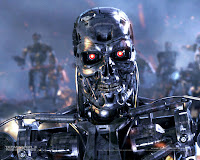 Remember Terminator Salvation? Neither do a lot of people. But, believe it or not, a fourth Terminator film actually came out last summer. And you know what? It wasn’t terrible. But when the highlight of your multi-million dollar Hollywood blockbuster is a pseudo-cameo by 1980s-era Arnold Schwarzenegger, it might be time to reroute.

Rights to the Terminator sequels were recently acquired by Pacificor, a hedge fund. David Wisher, who wrote Terminator and Terminator 2: Judgment Day, has since revealed that he’s sketched out some ideas for two more films, which would take place after Salvation. Evidently, the series isn’t ready to say “hasta la vista, baby” just yet.

So what does Terminator creator James Cameron think about all of this renewed interest in the franchise he kicked off 26 years ago? The Avatar director told MTV that, in his opinion, the series has “run its course” and he has zero interest in being involved in any future Terminator films.

“[T]he soup's kind of been pissed in a little bit by other filmmakers, so I don’t have any personal desire to go back to it,” Cameron explained. “So I certainly wouldn't want to be a dog in the manger and disallow my friends from making a little money off it. Why would I do that?”