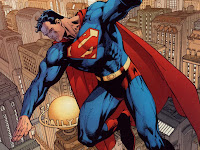 Mike Fleming and Nikki Finke over at Deadline Hollywood are reporting that Warner Bros., which said last year it had no plans to revisit the Superman film series after Superman Returns underperformed in 2006, is asking Christopher Nolan (Batman Begins, The Dark Knight) to oversee production of a reboot in a “godfather” capacity. According to the article, this “godfather” role does not mean he’ll be directing. Rather, he will essentially guide the project and ensure it moves in the right direction.

While I don’t think anyone wants a Nolan-esque “dark and gritty” take on the Man of Steel—that’s Batman’s territory, after all—the acclaimed director has already proven that he knows a thing or two about approaching comic book properties with the proper tone. I’m optimistic, if this turns out to be true.

The Deadline Hollywood piece also mentions that Nolan has “hatched an idea” for a Dark Knight sequel, and that his brother Jonathan is already scripting the film with David Goyer. Let the villain speculation resume!
Posted at 3:49 PM
Email ThisBlogThis!Share to TwitterShare to FacebookShare to Pinterest
Labels: Batman, DC Comics, Superman, The Dark Knight, Warner Bros