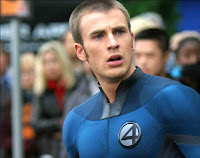 Actor Chris Evans—Johnny Storm from the Fantastic Four flicks—has accepted the role of Steve Rogers/Captain America in Marvel Studios’ The First Avenger: Captain America, according to The Hollywood Reporter. The film, directed by Joe Johnston, is scheduled for release on July 22, 2011.

Evans was one of the few bright spots in Tim Story’s otherwise mediocre Fantastic Four movies, and his more serious work in films such as Danny Boyle’s Sunshine proves that he has the acting chops and screen presence for this presumably demanding role. Evans’ deal with the studio reportedly comes with an option for nine films, including two Captain America sequels, three Avengers ensemble films and as many as three appearances in other Marvel projects.