Hollywood to Resurrect Godzilla in 2012 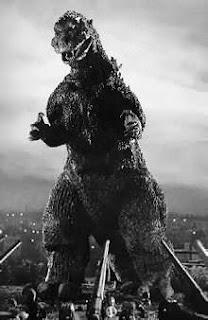 Thanks to Netflix, I recently revisited Roland Emmerich’s 1998 Godzilla remake, and you know what? I didn’t completely hate it. But I did feel a pang of embarrassment for my 14-year-old self, who actually saw the thing more than once in theaters and later bought it on VHS. I even have a copy of Godzilla: The Album kicking around somewhere. Keep in mind, Godzilla was the movie of summer 1998, and many of us weren’t about to admit that the year’s most anticipated blockbuster was a huge letdown. Or maybe we were unknowingly preparing ourselves psychologically for the release of Star Wars: The Phantom Menace the following year.

While Godzilla has since starred in a string of man-in-suit monster films in his native Japan—concluding with Godzilla: Final Wars on the King of the Monsters’ 50th anniversary in 2004—a lukewarm reception to the American reimagining of the iconic Toho monster has kept him from resurfacing in the United States. But, Variety reports, Legendary Pictures and Warner Bros. are co-producing and co-financing a Godzilla film that will hit theaters in 2012.

“Godzilla is one of the world’s most powerful pop culture icons, and we at Legendary are thrilled to be able to create a modern epic based on this long-loved Toho franchise,” said Thomas Tull, chairman and CEO of Legendary. “Our plans are to produce the Godzilla that we, as fans, would want to see. We intend to do justice to those essential elements that have allowed this character to remain as pop-culturally relevant for as long as it has.”

This could be pretty cool, as long as Legendary and Warner Bros. deliver in terms of giant monsters (CGI or otherwise) and massive amounts of simulated property damage. I have many fond memories of spending Saturday afternoons with Godzilla movie marathons on New York’s WPIX (channel 11) when I was younger. And, as an adult (snicker), I still love Ishirō Honda’s original 1954 Gojira, a post-World War II cautionary tale about the dangers of nuclear weapons that bears only slight resemblances to the cheesier 1956 American re-edit, Godzilla: King of the Monsters, and its increasingly campy sequels (although many of those are fun too).

With Hollywood’s current obsession with reviving all things with built-in fanbases, I’m honestly surprised it took this long for producers to exploit Godzilla. Did I say exploit? I meant…exploit.
Posted at 10:50 PM
Email ThisBlogThis!Share to TwitterShare to FacebookShare to Pinterest
Labels: Godzilla, Gojira, Toho, Warner Bros.