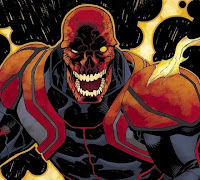 Weaving has already earned his geek stripes several times over, playing Agent Smith in the Matrix trilogy, Elrond in the Lord of the Rings trilogy and even V in V for Vendetta. Heck, regardless of how you feel about Michael Bay’s Transformers films, you’ve gotta admit that Weaving rocked as the voice of Megatron. But, frankly, he rocks in pretty much everything.

The Nigeria-born Australian actor recently worked with Captain America director Joe Johnston on The Wolfman, so this news makes a whole lot of sense. But keep in mind that the deal has yet to be finalized. Expect an official casting announcement—which will hopefully reveal who will be playing Cap himself—in the very near future.
Posted at 3:44 PM
Email ThisBlogThis!Share to TwitterShare to FacebookShare to Pinterest
Labels: Captain America, Hugo Weaving, Joe Johnston, The First Avenger