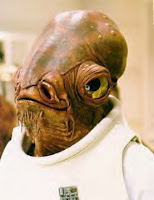 Last week, students at the University of Mississippi voted on a new mascot to replace Colonel Reb, a borderline offensive caricature of an old Southern gentlemen. The early winner? Admiral Ackbar from Return of the Jedi. Students have rallied behind the Mon Calamari Rebel Alliance leader, launching websites such as notatrap.org, which asks, “Who wants a Colonel when you can have an Admiral?”

Clearly appreciating this humor in this situation, Lucasfilm issued a tongue-in-cheek statement on the matter to The New York Times. “Lucasfilm is flattered that our Star Wars fans at the University of Mississippi are considering electing Admiral Ackbar as their mascot,” the studio said. “The last time we checked in with Admiral Ackbar he was leading the Rebel Alliance Fleet on a critical mission so it will be difficult for him to show up for the games!”

And it seems some hardcore Ole Miss fans and discontented students would prefer it that way. TMZ reports that angry students have threatened to transfer if Ackbar becomes the new mascot. Angry parents have even vowed to “never send their kids to Ole Miss” if the character wins. They must be Trekkies.
Posted at 8:40 PM
Email ThisBlogThis!Share to TwitterShare to FacebookShare to Pinterest
Labels: Admiral Ackbar, Lucasfilm, Ole Miss, University of Mississippi

Many institutions limit access to their online information. Making this information available will be an asset to all.