Director Michael Bay has confirmed on his website that pre-shooting on Transformers 3 will begin in about one month, and that locations in the film will include Los Angeles, Chicago, Washington, DC, Florida, Texas, Africa, Moscow and China (wow). Bay also announced that Frances McDormand and John Malkovich will be joining the cast alongside Ken Jeong, whom audiences might recognize from Step Brothers, The Hangover and, most recently, NBC’s Community. Since Jeong is of Asian descent, and given the fact that Bay loves his broad, offensives ethnic stereotypes, I’m guessing he’ll play a Chinese delivery guy who can’t drive. Or he’ll own a nail salon. Laughing yet? 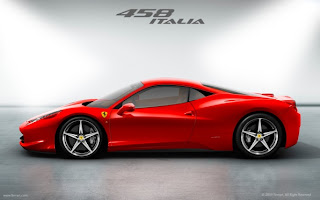 On the giant robot front, Bay wrote that one of the new Autobots in the film will be a Ferrari 458 Italia (pictured). We know nothing about the actual character, but something tells me that Bay won’t be able to resist going the Jersey Shore route with this guy. We know Autobots can probably pump their fists, but can they tan?

The film is scheduled to open on July 1, 2011.
Posted at 10:03 PM
Email ThisBlogThis!Share to TwitterShare to FacebookShare to Pinterest
Labels: Michael Bay, Transformers 3