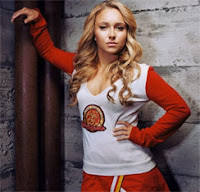 If you follow my film/television coverage over at Broken Frontier, you know I have some pretty mixed feelings about Heroes, NBC’s floundering superhero series that, for the past three years, simply hasn’t been as satisfying as its stellar first season.

While Heroes’ season four finale left things pretty open-ended should the struggling show return, most fans believed the February 8 episode, titled “Brave New World,” to be the show’s final bow. And while that might very well be the case, Angela Bromstad, NBC’s president of prime-time entertainment, recently told The Hollywood Reporter that the network has yet to make any final decisions regarding the fate of the series. It’s not necessarily over just yet.

“It’s a wait-and-see for us,” Bromstad said. When asked if a possible fifth season of Heroes would be the last, she added, “We’re going to cross that bridge when we come to it.”
Posted at 2:03 PM
Email ThisBlogThis!Share to TwitterShare to FacebookShare to Pinterest
Labels: Claire Bennet, Heroes, NBC