NPH Suits Up for The Smurfs 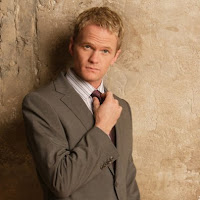 I really don’t have any interest in Sony Pictures’ The Smurfs, which starts shooting next month, but after learning that Neil Patrick Harris (How I Met Your Mother, Dr. Horrible’s Sing-Along Blog) is going to star in the CGI/live-action adaptation of the Saturday morning cartoon, it’s at least on my radar. This probably won’t be a legen…wait for it…dary role for Harris, but he seems to have a good time in everything he does—the Harold and Kumar movies, for example—and he’s always fun to watch.

“I’ll do my smurfiest to represent well,” he tweeted. “Why? Smurfs are rad.”

Harris is set to appear on Fox’s musical comedy series Glee later this year.
Posted at 11:20 AM
Email ThisBlogThis!Share to TwitterShare to FacebookShare to Pinterest
Labels: Dr. Horrible, How I Met Your Mother, Neil Patrick Harris, Smurfs