Can I confess something? I grew up having little to no interest in Tron, Disney’s groundbreaking 1982 film combining flesh-and-blood actors and computer-generated imagery. I was familiar with the premise (Jeff Bridges plays a computer programmer who’s sucked into the digital world), but by the time I actually sat down to watch it—I might have been 12 or 13 at the time—I couldn’t get over the relatively primitive special effects and the bizarre blacklight aesthetic. Not for me, I thought.

But my somewhat negative past experience with the film didn’t stop me from adding Tron to my Netflix queue in January. With Tron Legacy generating impossible-to-ignore buzz in various pockets of the geek community, I knew I must be missing out on something big. So I revisited the film as an adult (snicker) and, since I’m now able to better appreciate films as products of their respective time periods, I loved it. Also, since Jeff Bridges has emerged as somewhat of a cult icon since The Big Lebowski, I got a kick out of watching a young Jeff Bridges play DayGlo Jai Alai. As the Dude abides, so does the Wort. 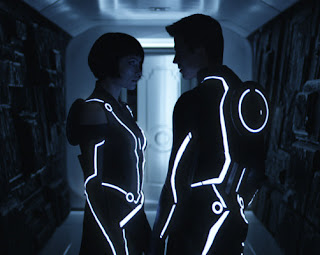 Now, like many of my fellow geeks out there, I’m actually very excited about Tron Legacy. And if the long-awaited sequel is successful, Disney could have another mega-franchise on its hands. According to a Blue Sky Disney blog post, which I came across via io9, Tron Legacy could be the first film in a new Tron trilogy. Additionally, a computer-animated television series could be in the works as well as a “Tron Experience” at Disney theme parks. This all depends on whether the new film is successful, but I can’t imagine any film featuring the gorgeous Olivia Wilde in skintight clothing (pictured) having a hard time getting asses in the seats. Ahem.