Backlash of the Titans 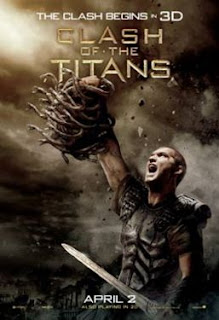 Warner Bros.’ remake of 1980s cult classic Clash of the Titans hits U.S. theaters this weekend, and the early buzz isn’t great. While many critics have taken aim at the paper-thin plot and lackluster performance by Avatar alum Sam Worthington—who plays Greek demigod Perseus in the flick—the primary flaw appears to be the 3D conversion process forced upon the film in post-production. In his less-than-glowing review, Drew McWeeny of HitFix.com calls Clash’s 3D “an unwatchable mess, ugly and strange and difficult to sit through.” He adds, “This is the polar opposite of Avatar, which was designed in 3D, shot in 3D, and which did all of its FX work with 3D in mind.”

Duncan Bowles from Den of Geek writes, “I cannot emphasize this enough: do not pay out for the 3D, as it simply isn’t there. The director [Louis Leterrier, who helmed The Incredible Hulk] didn’t even want it apparently, but lo and behold, Clash of the Titans was retro-fitted to turn a fast buck and the result is shocking. Please, please if you go and see Clash of the Titans, watch it in 2D before this whole mess gets out of hand.”

Indeed, it looks like the 3D post-conversion trend is turning out to be a massive step in the wrong direction, and it’s really just getting started. Fortunately, some directors are taking a stand. Love him or hate him, Michael Bay has emerged as a vocal opponent to the 3D conversion process, which producers have tried forcing on him for the third Transformers film. He’s not impressed.

“Right now, it looks like fake 3D, with layers that are very apparent,” Bay told Deadline.com’s Mike Fleming. “You go to the screening room, you are hoping to be thrilled, and you’re thinking, ‘huh, this kind of sucks’. People can say whatever they want about my movies, but they are technically precise, and if this isn’t going to be excellent, I don’t want to do it. And it is my choice.”

As I posted recently, James Cameron—the man indirectly responsible for this 3D gold rush with the massively successful Avatar—is also opposed to post-production 3D conversion, saying that 3D should be a creative decision made by the director.

“This is another example of Hollywood getting it wrong,” he said. “Now, you’ve got people quickly converting movies from 2D to 3D, which is not what we did. They’re expecting the same result, when in fact they will probably work against the adoption of 3D because they’ll be putting out an inferior product.”

Bottom line? Don’t support half-assed 3D conversions. If you want to see Clash this weekend, see it in 2D as it was meant to be seen.
Posted at 11:06 AM
Email ThisBlogThis!Share to TwitterShare to FacebookShare to Pinterest
Labels: Clash of the Titans, James Cameron, Louis Leterrier, Michael Bay, Sam Worthington