Clash of the Titans 2: Bubo Strikes Back? 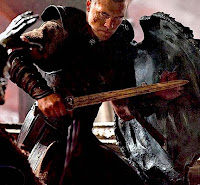 In spite of mixed reviews and an apparently universal rejection of its post-production 3D conversion process, Louis Leterrier’s Clash of the Titans remake had a tremendously successful opening weekend, earning $61.4 million in U.S. theaters. Not surprisingly, there is already talk of expanding the new Clash into a trilogy, taking demigod Perseus (Sam Worthington) and his pals on new adventures that delve deeper into Greek mythology.

“I’m not saying I know what exactly will happen to Perseus in the next two movies, but I know the direction and it’s pretty exciting,” Leterrier told MTV. “It’s ancient superheroes.”

Indeed, and Leterrier knows a thing or two about superheroes. He directed the criminally underrated The Incredible Hulk, and he’s reportedly a strong contender to direct Marvel’s team-up flick The Avengers, which is slated for a 2012 release. But even if he doesn’t land that coveted gig, the reborn Clash franchise will keep him plenty busy.

“You’ve got so many creatures, so many heroes, so many gods,” Leterrier explained. “I could spend the rest of my life directing Greek mythology movies and I would still not finish everything.”

As for Clash’s heavily criticized 3D? Leterrier added that if he gets to complete his trilogy, he’d prefer to shoot the sequels using 3D cameras instead, as James Cameron did with Avatar.

"f we ever get to do [Clash] in 3D, that would be fantastic,” Leterrier said.

I haven’t seen the new Clash yet, but I’d certainly love to see more films based around Greek mythology.

So Leterrier, get Kraken! (Sorry, I couldn’t resist.)
Posted at 5:15 PM
Email ThisBlogThis!Share to TwitterShare to FacebookShare to Pinterest
Labels: Avatar, Clash of the Titans, Louis Leterrier, Sam Worthington