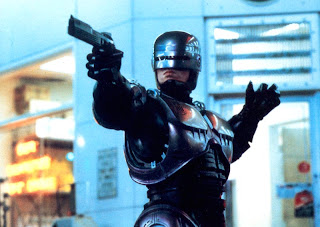 You know, ever since I sat down and watched Paul Verhoeven’s RoboCop analytically for an introductory film class at UConn, I’ve thought that the 1987 action flick’s story of resurrection and salvation was an obvious allusion to the story of Jesus Christ. But in a recent interview with MTV, Verhoeven confirmed my suspicions, saying that RoboCop (Peter Weller) is, essentially, “the American Jesus.”

“The point of RoboCop, of course, is it is a Christ story,” Verhoeven said. “It is about a guy that gets crucified after 50 minutes, then is resurrected in the next 50 minutes and then is like the super-cop of the world, but is also a Jesus figure as he walks over water at the end.”

Wait, walking on water? During RoboCop’s climactic battle against Clarence Boddicker (Kurtwood Smith) and his thugs in an abandoned steel mill, the titular robotic (and apparently messianic) law enforcer walks across a shallow pool of water and says the line, “I am not arresting you anymore.” “Meaning,” Verhoeven said, “‘I’m going to shoot you.’ And that is, of course, the American Jesus.”

Wow. Verhoeven also weighed in on the planned RoboCop remake. While he’s not against someone else taking a crack at his creation, he does think that part of the original film’s charm is that, due to budget constraints, it was pretty low-tech from a visual effects standpoint.

“I'm not so sure that [CGI and other modern effects] would improve the soul of the movie,” he told MTV.
Posted at 6:11 PM
Email ThisBlogThis!Share to TwitterShare to FacebookShare to Pinterest
Labels: Paul Verhoeven, RoboCop