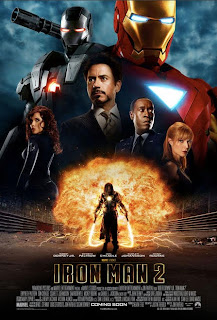 “You want to be sure you don’t suffer from multi-villainitis,” Favreau said. “That’s been the downfall of many other superhero franchises.”

He added that each new villain serves a clear purpose. The Black Widow (real name Natasha Romanoff) is meant to shake up the relationship between Tony Stark (Robert Downey Jr.) and Pepper Potts (Gwyneth Paltrow), while Justin Hammer is meant to complicate the friendship between Tony and his best pal James “Rhodey” Rhodes (Don Cheadle). As for Mickey Rourke, well, he’s on hand to be creepy and destroy things with energy whips. He also has a pet cockatoo. ‘Nuff said.

“When done right, a superhero movie has the character’s personal life mirroring what’s happening in their superhero world, and sometimes you have to force things to do it,” Favreau explained. “In this case, I’d say, we found an organic way to do it. We wanted both A-story and B-story to be affected by these new characters.”