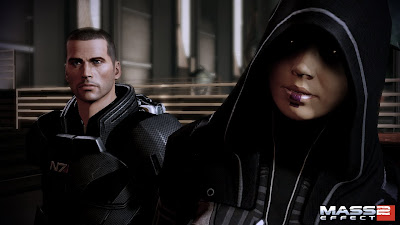 Let me preface this post by saying that Mass Effect 2 is among the best games I’ve ever played. Even after two playthroughs with two different Commander Shepards (one male and one female), I still find myself consistently drawn to this second chapter in BioWare’s meticulously-crafted space opera. So when I learned that Electronic Arts and BioWare were releasing “Kasumi’s Stolen Memory,” the first piece of premium downloadable content (DLC) for the game, I knew I needed to own it. After all, 560 Microsoft Points ($7) seemed at first like a small price to pay for a new mission, new weapons and a new character.

So I bought the mission pack and was introduced to a mysterious thief named Kasumi. She needs my help infiltrating a formal party so she can break into the high-security vault of smugger/weapons dealer/art aficionado Donovan Hock. In return, she’ll join the crew of the Normandy. Sounds reasonable.

I liked the secretive James Bond-esque feel of the first half of this mission, as Shepard must dismantle Hock’s security bit by bit without alarming the guests at the party. Once Shepard and Kasumi get into the vault to retrieve the titular “stolen memory” (housed in a device called a graybox), the mission more closely resembles a standard Mass Effect 2 loyalty mission, with legions of faceless enemy soldiers and mechs to mow down before a final showdown with Hock. It was over in just an hour, which is consistent with other loyalty missions in the game. But, then again, we didn’t have to pay extra for any of those.

While some hardcore Mass Effect fans might argue that “Kasumi’s Stolen Memory” is worth the $7 it costs to download in spite of its brevity and the fact that Kasumi isn’t overwhelmingly interesting character-wise, the premium DLC trend is becoming a bit alarming. Why wasn’t this mission included in the release version of the game? Why must fans of the game shell out more than the $60 retail price of the game just to round out the crew of the Normandy? This is akin to a book publisher releasing an unfinished novel and asking readers to pay for additional chapters a few months later. Very lame.
Posted at 5:19 PM
Email ThisBlogThis!Share to TwitterShare to FacebookShare to Pinterest
Labels: BioWare, DLC, Mass Effect 2