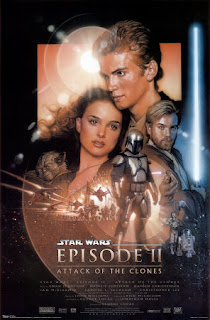 It’s taken me a while to realize this, but Star Wars: Episode II-Attack of the Clones is the worst of the Star Wars prequels. But rather than bore you with the reasons Clones doesn’t really work all that well if you think about it, I’ll direct you to Red Letter Media’s uproariously funny 90-minute review of the film, which hit YouTube this weekend. In case you forgot, Red Letter Media posted an equally brilliant analysis of The Phantom Menace late last year.

“Almost everything in this movie is wrong,” says Red Letter Media’s “Mr. Plinkett,” an obsessive film buff/deranged serial murderer. “The only way to really describe it [is] to imagine that someone has dumped out five different puzzles into a pile on the floor, mixed them all up and told you to put ‘em all back together in one hour or they were gonna stuff you into an old fridge filled with flesh-eating cockroaches.”

Plinkett astutely adds, “You know, if you stand back and look at this movie as a whole, it just comes off to the viewer as some kind of assembly-line production devoid of any emotional involvement by anyone; a film that coldly exploits the works of craftsmen and artists in a sterile, computer-controlled environment resulting in a series of colorful, crisp images that are played in a sequence.”

Looking back at the film, nearly eight years after its release, it’s really hard to disagree with him. Watch the first installment of the nine-part review below, and head to Red Letter Media’s YouTube channel to watch the rest.

I disagree, the third is the worst. The Phantom Menace is a steep drop even from Return of the Jedi but it's an enjoyable piece of Star Wars media, roughly on par with the novels, comics, shows, games, and so on. The same could not be said of Attack of the Clones, but it's got some great Christopher Lee stuff. The third however, is maybe the steepest drop yet. As a standalone movie it's just lazy mangled garbage, and it hides behind the fact that it's a Star Wars story and part of a trilogy, while actually being pretty bad at those things as well.