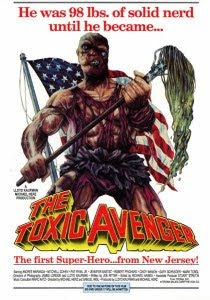 Look, I’m not about to pretend I’m outraged that The Toxic Avenger, the ultra-violent 1984 Troma cult classic, is getting remade as a PG-13 action comedy, according to Deadline.com. Sure, I discovered the first three Toxic Avenger movies in the early 1990s thanks to late-night cable television (specifically, USA’s Up All Night, hosted by the busty Rhonda Shear), but even then, I knew these movies were crap. However, I was somehow drawn to them because I knew they were something I really shouldn’t be watching. I also got a kick out of the fact that these raunchy, gory movies were the inspiration for Toxic Crusaders, a watered-down cartoon version of the movie property that teamed mop-wielding mutant Toxie with a gang of hideously deformed—and eco-friendly—superheroes.

While the Toxic Crusaders cartoon was short-lived—as were many kiddie franchises that tried to compete with the Teenage Mutant Ninja Turtles on TV and in toy aisles—it looks like producers Akiva Goldsman, Richard Saperstein and Charlie Corwin are going for a similar approach, turning Toxie into a “green” and presumably less violent heroic character. The remake could spawn sequels, another animated TV series and comic books.

Speaking of comic books, I should probably point out that Goldsman wrote Batman & Robin, arguably the worst superhero film of all time. Just thought I’d point that out.

Do I think a Toxic Avenger remake is a good idea? Honestly, I typically greet remake/reboot/reimagining news like this with a shoulder shrug at this point no matter how invested I am in the property. However, I imagine hardcore Troma fans are upset about this, since the over-the-top brutality in these movies is part of their charm and is likely the reason people still talk about Toxie today. Hell, even the off-Broadway Toxic Avenger musical—which is likely responsible for the renewed interest in the franchise—features a fake gore “splatter zone” in the audience. Are general movie audiences going to be at all interested in this kinder, gentler hideously deformed creature of superhuman size and strength?

By the way, if you love schlock cinema and have a Netflix account, you can instantly watch The Toxic Avenger IV: Citizen Toxie, which is perhaps the most disgusting film I’ve ever seen. Ever.
Posted at 10:42 AM
Email ThisBlogThis!Share to TwitterShare to FacebookShare to Pinterest
Labels: Toxic Avenger