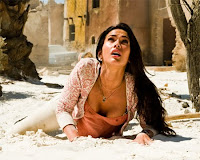 For many of you, this news will serve as yet another reason not to see Transformers 3.

According to Deadline.com’s Nikki Finke, Paramount will not be picking up Megan Fox’s option on Transformers 3 and, reportedly, the decision to oust her from the blockbuster flick rested with Michael Bay.

Considering the fact that Megan Fox has been trashing the director in the press over the past year or so, saying he’s “like Hitler on his sets” among other disparaging remarks, it’s not all that surprising that Bay dumped her. However, Bay did seem to confirm Fox’s involvement in the film late last year when he confirmed its release date: July 1, 2011.

“P.S. Megan Fox, welcome back,” Bay wrote in an October posting on his website. “I promise no alien robots will harm you in any way during the production of this motion picture.”

Well, I guess he was half right, since it’ll be some other hot, young starlet of questionable acting talent on the run from evil alien robots next summer when Transformers 3 hits theater.
Posted at 8:24 PM
Email ThisBlogThis!Share to TwitterShare to FacebookShare to Pinterest
Labels: Megan Fox, Michael Bay, Transformers 3

Ugh... call me an elitist if you want, but I stopped caring about the Transformers franchise after seeing the trailer for the first film in June 2007.