GoldenEye Gets Shaken, Stirred on the Wii 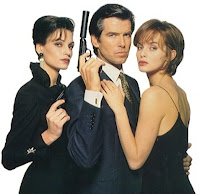 There’s a lot of exciting news coming out of the Electronic Entertainment Expo this year, and perhaps one of the most talked-about announcements—shockingly—came from the Nintendo camp. After years of speculation and rumors, we finally learned that Nintendo will be releasing an updated version of landmark console first-person shooter GoldenEye 007 for the Wii, which is slated for release this holiday season. GoldenEye with motion controls? Sounds promising.

There are plenty of reasons why this GoldenEye remake is a big deal. As avid Nintendo 64 aficionados are already aware, the 1997 title based on the 1995 James Bond film of the same name was one of the first games based on a movie that actually honored the source material. Moreover, GoldenEye was one of the first shooters developed specifically for a console audience, revolutionizing local multiplayer gaming in the process. Sure, the single-player campaign was solid in its own right—following the plot of the movie while providing a variety of mission objectives depending on the difficulty level—but its rich, balanced multiplayer modes kept gamers coming back for years. Hell, I’m sure there are some gaming circles that still fire up GoldenEye for marathon sessions 13 years later, even though the graphics and controls haven’t exactly aged well compared to contemporary shooters like Modern Warfare 2.

Some gamers might have been content with a simple graphical upgrade of the Nintendo 64 classic, but developers are evidently rebuilding GoldenEye from the ground up. Kotaku reports that although the original title was developed by Rare—the development house behind such phenomenal titles as Donkey Kong Country and Perfect Dark—the remake is being handled by Eurocom and Activision, who are crafting a game inspired by the original without recreating it completely. In addition, even though Pierce Brosnan played Bond in the GoldenEye film, present-day 007 Daniel Craig is slipping into the character’s trademark tuxedo this time around. Weird.

The game will support four-player split-screen multiplayer in addition to eight-player online modes. I’m not quite sure GoldenEye will have the same charm if you can’t talk trash to the guy on the couch next to you after sending him flying with a proximity mine, but since online play is so popular these days, it’s a key addition.

As excited as I am about a GoldenEye remake, I urge my fellow fanboys to remain cautious. This isn’t really the GoldenEye we know, and this could just be yet another attempt to cash in on the name. As fans can surely recall, a title called GoldenEye: Rogue Agent was released by Electronic Arts in 2004, and it was pretty awful. I would almost rather have seen Activision develop an all-new Bond title that builds on what worked in GoldenEye as opposed to remaking it. After all, I thought Activision and Treyarch’s Quantum of Solace—which used the Call of Duty engine—was pretty damn good, all things considered. If GoldenEye isn’t going to be a faithful remake of the original with revamped graphics and control, why bother calling it GoldenEye save for the obvious monetary reasons? Or did I already answer my own question?

Nevertheless, the Wii GoldenEye is a first-day purchase for me and I can’t wait to dive into its multiplayer modes. But I will say this: If you play as Oddjob, we are no longer friends.

Watch the trailer below (via G4).