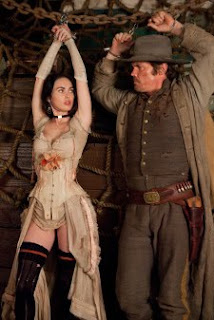 On paper, Jonah Hex seems like a character primed for the silver screen. A scarred, surly, Old West antihero, Hex made his debut in DC Comics’ All-Star Western #10 in 1972, and even though he never garnered the popularity of Batman or Superman, he’s become one of the publisher’s cult-favorite characters. Surely, those fans that have supported this character over the decades must be pretty excited that their favorite gunslinger is making his cinematic debut in Jimmy Hayward’s Jonah Hex, right? Well, they shouldn’t be.

One of the most disappointing things about Jonah Hex is that it could have been a far better film in more capable hands. Starring Josh Brolin as the titular bounty hunting badass and John Malkovich as his nemesis, a former Confederate officer-turned terrorist named Quentin Turnbull, this film should have been a slick, modern Western based on solid source material featuring top-notch actors. Instead, in spite of Brolin’s noteworthy performance that nearly pulls this film out of the muck on several occasions, it’s one of the most predictable and sloppily-edited action films in recent memory, and one can’t help but think that this was a total rush job.

Oh, and for those of you titillated by the idea of Megan Fox playing a tough-as-nails (and frequently sweaty) gun-packing prostitute, here’s another bombshell: She’s barely in the movie.