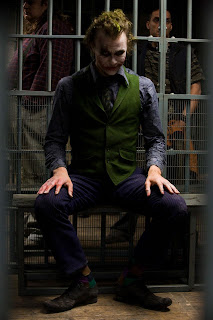 In a recent interview with Empire Magazine (via SuperHeroHype), director Christopher Nolan confirmed that the Joker will not be appearing in the highly anticipated sequel to The Dark Knight.

“No,” the director swiftly replied when asked if the Clown Prince of Crime would be recast in the next film following the death of Heath Ledger. “I just don’t feel comfortable talking about it.”

It’s interesting to note that although Nolan has been hashing out a screenplay with his brother Jonathan, he hasn’t officially signed on to direct. However, it’s almost a certainty that he’ll wind up helming the as-yet-untitled second Batman sequel to round out his trilogy.

As for villains, Nolan’s told reporters that neither Mr. Freeze nor the Penguin would factor into his grounded-in-reality Batman universe, leading many fans to speculate that Catwoman and the Riddler are two likely candidates to square off against the Caped Crusader when this film hits theaters in 2012. It’s almost a shame that Nolan’s Batman movies cling so tenaciously to realism, as I’d really be interested in seeing Clayface, Killer Croc or Poison Ivy handled well on the big screen. Having said that, I think Nolan could have fun with the Riddler, provided that his maniacal mind games aren’t overtly reminiscent of the Joker’s calculated lunacy in the last film. If we can’t have the Joker again, the last thing we want is “Joker Light.”