'Batman: Under the Red Hood' Is Bloody Good 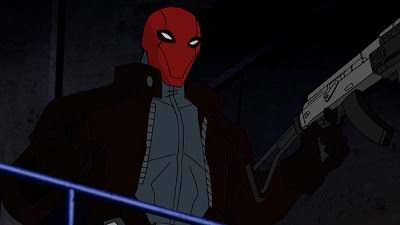 Opening with the Joker joyfully (and bloodily) beating the second Robin, Jason Todd, to death with a crowbar, it’s clear that Under the Red Hood earns its PG-13 rating. Although most Batman fans are more than aware of this scenario from the controversial A Death in the Family story arc of the late 1980s—during which comic book readers actually decided Todd’s fate via a 900 number—actually seeing this scene play out in animated form is fairly disturbing. Young Bat-fans should stick with the far more kid-friendly Batman: The Brave and the Bold on Cartoon Network for their animated Caped Crusader fix.

After the brutal opening sequence, the film flashes forward five years, when a mysterious new villain, the Red Hood, emerges in Gotham City, much to the chagrin of established crime bosses like Black Mask. Batman and the grown-up original Robin Nightwing must thwart this new threat to their city and root out his true motives, but what they ultimately find is a surprise to them both. Those of us who’ve read Under the Hood by Judd Winick, who also penned this film, will just have to settle for acting surprised. But even though some of the twists (especially the big one) in this film might seem spoiled for those of us who’ve followed the comic books through the years, Under the Red Hood is satisfying nevertheless.

As mentioned earlier, this is a mature Batman adventure that’s hardly squeamish about splattering blood or breaking bones, but fortunately its “adult” slant doesn’t simply apply to its PG-13 violence, language and drug references: Under the Red Hood is as sophisticated as it is shocking. Due to the personal nature of the story, this film examines Bruce Wayne’s sense of morality, his relationships with his protégés and even his twisted kinship with his rogues gallery. If you enjoy psychologically dissecting your superheroes, Under the Red Hood does just that.

Head over to Broken Frontier to read the full review.
Posted at 6:05 PM
Email ThisBlogThis!Share to TwitterShare to FacebookShare to Pinterest
Labels: Batman

A very very honest review of the movie I must say. These were the exact feelings I got when I saw the movie. Good job, keep it up!

Batman has a very gly facemask of typical red devilish color. But actually the man behind that mask has a beautiful heart.