There’s not much to say about Entertainment Weekly’s first look at Ryan Reynolds’ computer-generated costume in the upcoming Green Lantern film that hasn’t already been said by a multitude of angry comic book fans on the Internet. Yes, the muscle striations on the suit make it look weirdly organic. No, the costume doesn’t really scream “Green Lantern.” Yes, the mask seems a bit…off. However, I’m willing to give director Martin Campbell and Warner Bros. the benefit of the doubt at least until we actually see this suit in motion. If it looks like absolute crap in the first trailer, then we can start worrying.

Until then, take a gander at the EW cover and judge for yourself. 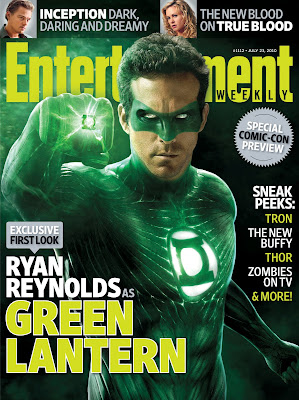