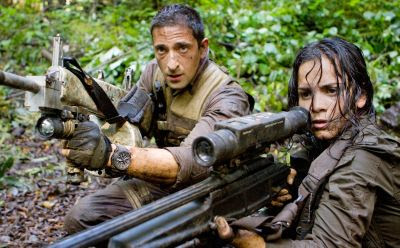 According to estimates, Predators—a modestly budgeted reboot of the 1980s sci-fi franchise—earned just over $25 million during its debut weekend, proving that there is a place for hard-R action films in a summer dominated by family-friendly fare and sparkly vampires.

Produced by Robert Rodriguez (Sin City) and directed by relative newcomer Nimród Antal, Predators cost just $38 million, and it looks like it will have no problem making a profit in the coming weeks based on relatively positive word of mouth. Perhaps the reason Predators didn’t perform better against weekend box-office frontrunners Despicable Me and Twilight: Eclipse is the simple fact that it didn’t have an expensive marketing campaign behind it. Again, there’s that frugality.

I went into Predators with tempered expectations. Although I grew up loving John McTiernan’s original Predator, I would never call it “smart” cinema. But it’s a well-crafted 1980s action film that has stood the test of time, which can’t be said of scores of other genre films released during that time period. With some great creature effects work by the late Stan Winston and some surprisingly strong performances by Arnold Schwarzenegger, Carl Weathers, Jesse Ventura and Bill Duke, Predator remains thoroughly enjoyable even today. Unfortunately, after a weak 1990 sequel and two horrendous Alien vs. Predator spinoffs, it looked like this franchise was beyond salvaging. When I bought a ticket for Predators, touted as a much-needed overhaul of this aging property, I did so with trepidations. Given the series’ track record for the last two decades, it was bound to suck, right?

Wrong. I’m happy to report that Predators is actually a whole lot of fun and is this series’ first worthy sequel. It’s a nice bookend to the original film (this time around, the Predators hunt hand-picked human warriors on an extraterrestrial game preserve) and it successfully makes a believable action hero out of its star, Adrien Brody. I’m not going to spoil anything, but Brody reaches an almost Schwarzeneggerian level of badass when he faces off against one of the larger Predators during the film’s climax. All in all, it’s a great time at the movies and it’s a lot better than you probably think it is.

Is Predators perfect? Heck no, but neither was the original. I’m not crazy about Laurence Fishburne or Topher Grace’s performances, and some of the references to the original film come off as a bit forced. It would have also been great if Rodriguez mainstay Danny Trejo was given more to do.

Speaking of Trejo, attached to Predators was a trailer to Rodriquez’s Machete, which expands the fake Machete preview featured in the underrated Grindhouse into a full-length movie. With Trejo as the titular renegade “Mexican Federale” and a cast including the likes of Steven Seagal, Michelle Rodriguez, Cheech Marin, Jessica Alba, Don Johnson, Robert De Niro and the recently-imprisoned Lindsay Lohan, this looks like the proper trash cinema sequel to Grindhouse I’ve wanted for the past three years. I can’t wait.