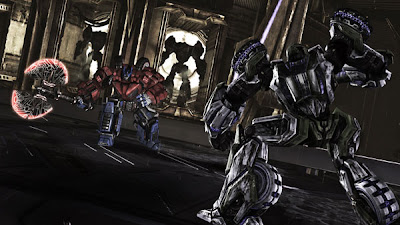 These days, Transformers fandom is typically dominated by people complaining that director Michael Bay has, through his last two Transformers films, engaged in a number of violent sexual acts with their childhoods. It’s refreshing, then, that legions of Autobot aficionados and Decepticon devotees now have something to celebrate: Transformers: War for Cybertron is a great game.

“Hold on,” you might say. “A licensed game that’s actually playable is rare enough, but there’s a good Transformers video game on store shelves?” There is, dear reader. And while I appreciate your enthusiasm, talking aloud to your computer monitor simply isn’t healthy.

War for Cybertron has nothing to do with Bay’s films, but if it did, it would take place long before Optimus Prime befriended an excitable Shia LaBeouf or Bumblebee gave John Turturro a golden shower (about which he was certainly not excited). Based on the fan-favorite Generation 1 continuity, the game follows the civil war between the heroic Autobots, led by Zeta Prime, and the devious Decepticons, led by the power-hungry Megatron. Players participate in both sides of the war, taking control of iconic characters such as the heir apparent Autobot leader Optimus (voiced by cartoon and film voice actor Peter Cullen), Bumblebee, Ratchet, Megatron, Starscream and Soundwave. The campaigns aren’t long, clocking in at about four hours each, but the gameplay is so frenetic and fun you’ll be compelled to play through both sides of the war at least once.

Like last summer’s Arkham Asylum—which made the most out of the Batman license while delivering an overwhelmingly satisfying console experience—War for Cybertron similarly serves as a love letter to fans of its franchise while showing off some surprisingly solid play mechanics. Developer High Noon Studios put gameplay first, building this title as a strong third-person shooter that just happens to take place in the Transformers universe. When these titles are developed the other way around, as licensed products that just happen to be video games, then things get problematic.

Playing a lot like Gears of War, War for Cybertron ditches that game’s cover system in favor of the ability to transform your character from robot to vehicle form at any time. This might seem gimmicky, as was the case in previous Transformers games, but transforming in this title is incredibly fluid and organic, allowing players to approach firefights and other challenges in a variety of ways.

Like most shooters these days, there is a sizeable multiplayer component in War for Cybertron, including a number of competitive and cooperative online game modes. Although I haven’t had the time to dive too deeply into the multiplayer, something tells me the single-player campaigns were originally designed for more than one participant (the game supports three-player online co-op). I’m not complaining about the game’s difficulty, even though it does get frustrating at times and ammo seems scarce, but certain moments in the campaigns seem more overwhelming on the medium difficulty setting than they were likely intended to be.

Additionally, although the visuals in this game are solid, Cybertron doesn’t offer a whole lot of variety in terms of locations. I don’t expect the Transformers’ homeworld to be lush and vibrant, but one does tire of brown and gray metal corridors. Perhaps an Earth-centric sequel will rectify this issue.

You might at first dismiss Transformers: War for Cybertron as a lame, licensed cash-in title, but it’s a lot more than that. If you’re a longtime Transformers fan (and what child of the 1980s isn’t?) then this is the proper Transformers game you’ve been waiting for. For everyone else not steeped in Cybertronian lore, it’s easily a worthwhile rental. And who knows? This could transform (ha!) you into a fan of the property in ways Michael Bay could not.

I didn’t want to sign off with a cliché, but it’s pretty irresistible at this point. Ahem: Unlike other licensed games, Transformers: War for Cybertron is certainly “more than meets the eye.”