Kick-Ass is now available on DVD and Blu-ray. Here’s an excerpt from my review of the film, originally published on Broken Frontier earlier this year.

If a movie bears the title Kick-Ass, it’s opening itself up to a great deal of criticism if it doesn’t, well, kick ass. Fortunately, Matthew Vaughn’s adaptation of Mark Millar and John Romita Jr.’s acclaimed Marvel comic book series is a bold, bare-knuckled and bloody hilarious deconstruction of superheroes as adolescent power fantasies.

Like the comic book, the film follows Dave Lizewski (Aaron Johnson), a dorky comic book fan who often asks himself the question we’ve all pondered at one point or another: “How come nobody’s ever tried to be a superhero?” While lacking in a proper superhero origin story and—perhaps most importantly—super-powers or crime-fighting ability, Dave creates a costumed alter-ego. Donning a scuba suit he purchased online, Dave’s first outing as a masked vigilante proves unsuccessful, as he’s beaten up, stabbed and hit by a car. Following his multi-faceted pummeling, Dave spends several weeks in the hospital, having his bones reinforced with metal plates (much like Wolverine, as he points out). Additionally, he’s suffered nerve damage, increasing his threshold for pain. 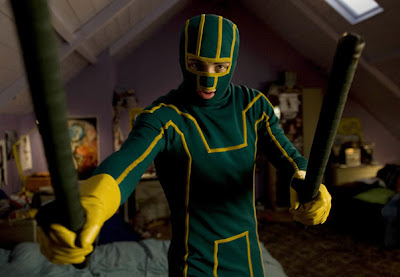 With his newfound ability to take a beating, Dave once again takes to the streets as Kick-Ass, fast becoming an Internet celebrity after his parking lot brawl with some gang members finds its way onto YouTube. Dave starts a Kick-Ass MySpace page, becoming a hero-for-hire of sorts. Unfortunately, Dave’s antics attract the attention of mob boss Frank D’Amico (Mark Strong), whose henchmen are being targeted by a masked crime fighter. Clearly, D’Amico thinks, this Kick-Ass character must be the one responsible. With the help of his comic book-loving son (Christopher Mintz-Plasse, more or less reprising his McLovin role from Superbad), D’Amico aims to take down Kick-Ass, even though the father-daughter team of Big Daddy and Hit-Girl (Nicolas Cage and Chloë Grace Moretz) are the real culprits and, unlike Kick-Ass, are very, very good at the whole superhero thing.

Johnson, a relative unknown in the United States, does an excellent job as Dave/Kick-Ass, clearly aping Tobey Maguire’s performance in the Spider-Man films to sell Kick-Ass not only as a winking commentary on superheroes in general, but on superhero movies as well. He’s particularly effective during his scenes with Lyndsy Fonseca, who plays Dave’s high school crush Katie Deauxma. With all of this film’s craziness—especially in its third act—it’s this somewhat bizarre teen romance that keeps Kick-Ass in perspective. After all, with Big Daddy and Hit-Girl stealing so many scenes of this movie, we often forget this is really Dave’s coming-of-age story.

And it is that teaming of Big Daddy and Hit-Girl that winds up being the most entertaining aspect of the movie. Big Daddy, who is actually former cop Damon Macready, has trained his daughter Mindy from a very young age to fight crime alongside him. You see, D’Amico framed Damon years ago, and his wife died during childbirth while he was in prison. Now, Damon and Mindy wage a two-person war against the mob.

Simply put, this is Cage’s best performance in years, especially when he dons the Big Daddy costume and does an uproariously funny imitation of Adam West’s Batman. The staccato speech pattern is quirky and jarring at first, but it’s also something we’d expect from a character that’s just as likely to shoot his 11-year-old daughter in the chest (she’s wearing a bullet-proof vest) as he is to wear mustache extensions while suited up to fight crime.

As for Hit-Girl, well, she’s likely the most memorable thing about this movie. What’s not to love about a purple-haired, pint-sized, foul-mouthed, femme fatale who mows down Mafia goons with relative ease? Hit-Girl’s no role model for the youth of today, but we love her anyway. Moretz has previously appeared in (500) Days of Summer and Diary of a Wimpy Kid, but we’ll probably be hearing a lot more about her in the years to come. This is a star-making performance.