The Spider-Man Musical’s in Full Swing? 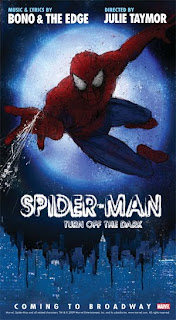 Troubled Broadway musical Spider-Man: Turn Off the Dark—featuring music by U2’s Bono and The Edge—is apparently finally happening, with an official opening night set for December 21.

According to The Onion’s A.V. Club, the Julie Taymor-directed rock opera starring the Wallcrawler boasts a whopping $52 million budget, making it the most expensive musical in history. But will the show be worth the massive price tag, True Believers? We’ll all find out when preview performances begin November 14.

Click here for show info.
Posted at 12:52 AM
Email ThisBlogThis!Share to TwitterShare to FacebookShare to Pinterest
Labels: Broadway, Spider-Man

I cant believe that this is actually happening! part of me hopes that it will be awesome, hoping for future projects like xmen on ice. But the other part of me wants to bear witness to the largest trainreck in broadways history just so that I can say I was there! Either way I'm going and not even electro can stop me! Even though he didn't offer much opposition